The seemingly tranquil river, over one kilometer wide, rounds a bend with increased urgency and plunges dramatically into an 85 meter deep fault marking the edge of the prehistoric volcanic plateau. Downstream, the Pampas of Argentina and Uruguay, ancient forests beaten back by apparently endless pasture and fields, among the greatest agricultural expanses on the planet. A thousand kilometers upstream, a mountainous region near Brazil’s coast. The same fault is exploited by the 2nd largest hydroelectric dam in the world, just 25 kilometers away on a different river, the construction of which in the 1970s flooded the world’s largest waterfall by volume, Guaíra Falls, which was dynamited for good measure once safely submerged by the reservoir.

Iguaçu Falls are the widest in the world, with over 2.5 kilometers of snaking cliffs from which thousands of cubic meters of water pour every second. The falls are visible from a distance as a mist rising into the air, through which the sun when at a conducive angle casts rainbows across the chasm. The falls are not continuous - tourist literature routinely references 275 separate cataracts, although the actual number varies significantly depending upon the volume of the river, which can swell 10-20x in flood. Below the falls, the canyon is only 200 meters wide, and the stirred up river rages through rapids, rocky cliffs on either side, a fringe of forest crowning the ridges.

Located on the border between Brazil and Argentina, the area around the falls has been a national park in both countries for almost 100 years, protecting 2500 square kilometers of low subtropical forest from being cleared, a marked contrast to the groomed farmland demarcating its boundaries. The area immediately around the falls was formerly farmland too, and thus is second growth forest now, although the official tourist mythology (repeated in almost all travel guides) glosses over this. Hundreds of thousands of acres of primary growth forest are also protected as part of this park system, and in sum the park is the most significant area of remaining Atlantic Forest, a highly biodiverse ecosystem that has been otherwise decimated by agriculture. 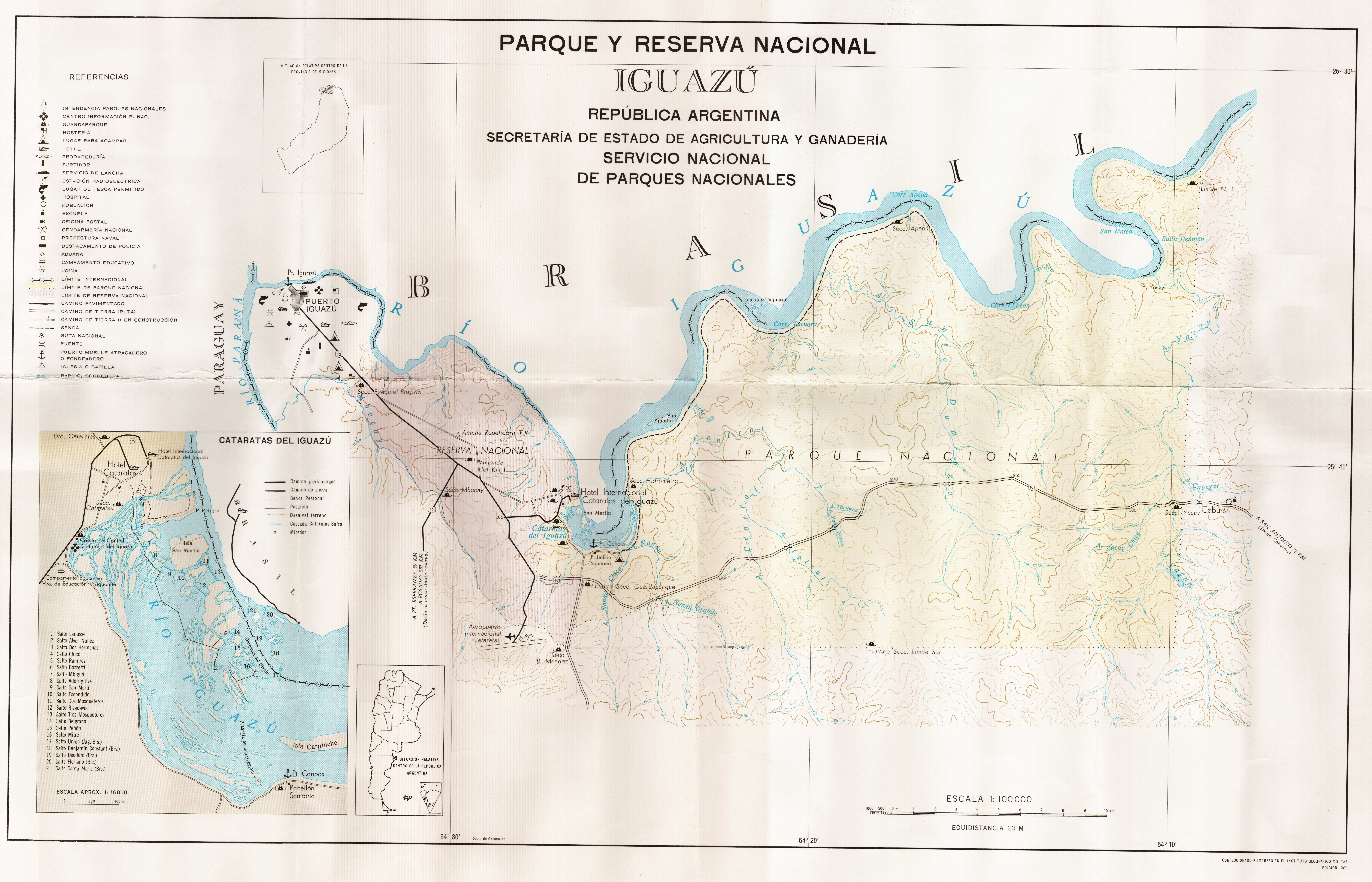 Most of the falls are located in Argentina, and thus the best viewing is from the Brazilian side. The first sight of each new section of the falls prompts a “holy shit” reaction, and the subsequent snapping of way too many photos that fail to capture the awesome scale, a reaction that is repeated several times as you walk along the trail. The roar of the water is deafening, and up close the mist is drenching. Hundreds of Great Dusky Swifts nimbly flit between and somehow through firehose torrents to perch on the damp cliff faces behind the flow. Water plants that grow only in briskly moving water hang precariously from the cliffs, battered by the torrential flow.

Tourist marketing often refers to the falls as being one of the “7 wonders of the world”; what isn’t mentioned is that they are listed as such only by the “New 7 wonders of the natural world”, a poll based semi-commercial initiative launched in 2007 and subsequently beset by scandal and criticism. Nevertheless, this designation is apparently all too effective at stoking interest: the falls are now the second most touristed location in South America, after Machu Picchu, with over 1.6 million visitors a year. Unlike US national parks, where the personal automobile’s primacy is respected, leading to long lines of back to back cars in prime viewing areas, the Brazilian and Argentine parks bus their tourists in via double decker coaches, one of which reliably arrives at the stop at the head of the trail every 3 or 4 minutes during the busiest hours of the day, disgorging fresh hordes to amble the gently graded concrete paths set into the valley walls to take in the splendor beyond.

From both sides, concrete pillars have been drilled into the riverbed to support walkways that allow visitors to walk hundreds of meters out into the middle of the river, in some sections to stand right above the dizzying plunge of one cascade or another. During peak hours, hundreds of tourists crowd these piers, cameras pointed in every spectacular direction. On the Brazilian side, actual glass elevators set around a steel structure rise to the top of the cliff, giving you a view of the falls from multiple angles before unloading you at rows of chinese trinket shops and seeming acres of fast food cafe seating.

In the national parks on each side of the river are sprawling luxury hotels with restaurants, pools, expensive glittering mineral trinket shops, and unimaginative landscaping; each boasts a teasing peek at part of the falls from its more expensive rooms. Hotel marketing is heavy on woo, offering the chance to “connect with [the waterfall’s] negative ions”, and to experience a “Japanese forest bath” (aka a walk in the woods). The Brazilian hotel was built on the site of a former farmhouse, with construction starting shortly after the founding of the park, in the late 1930s, some time after the farm’s former occupants had been run off the land by the government. Both hotels state that they are “the only hotel inside the national park”, which is true to the extent that there are two national parks, one run by each country. With a great deal of unintentional irony, the hotels brag about the very real benefit of being able to walk the trails in the early hours of the day, before visitors misguided enough to stay in a hotel outside of the park arrive. If the exclusivity of the hotel isn’t enough for you, you and your partner can book a private champagne toast in the hotel’s bell tower, or a private meal in a gazebo, curtained off from the other guests. Upon checking out, you are solemnly presented with a small vial of water plucked from the beating heart of the cascade, presumably fit for christening or exorcism, as needed. 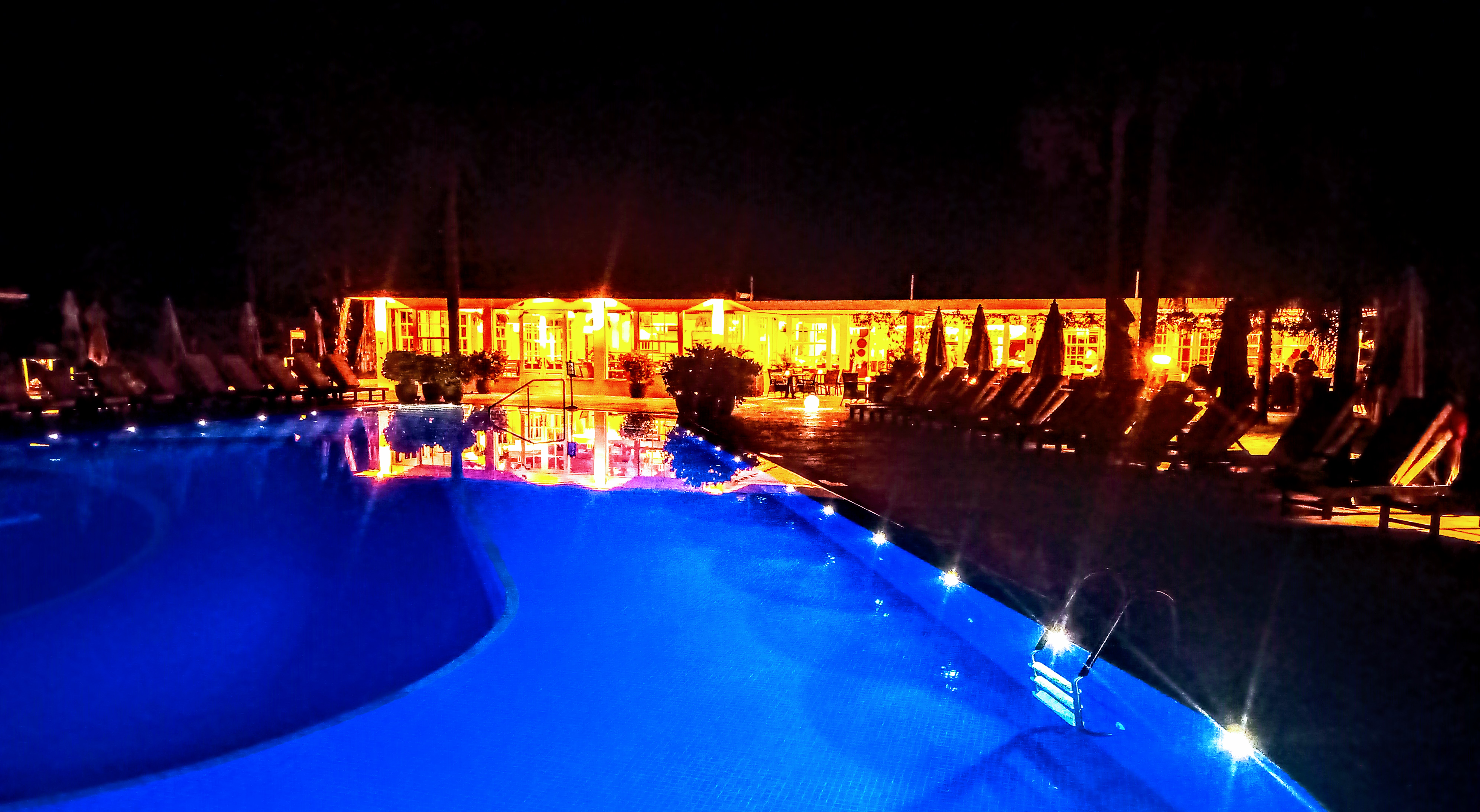 Incongruously intrusive in such a spectacular setting, sightseeing helicopters are a constant presence overhead during daytime hours, their beat mingling in the noisescape with the engines of idling diesel buses, oftentimes two or three circling the falls at the same time. An article in Nature magazine relates the complaint of a local biologist attempting to study birdsong - his remote field recorders routinely pick up nothing but the chatter of the blades bearing aloft oblivious thrillseekers. The helicopters have been a plague since at least the 1980s; the author of a Washington Post travel article from the end of that decade complains about how the helicopters ruin the peace, describing how the guides bitterly resent their operation and encourage tourists to sign a petition requesting that the flights be scaled back, relating that her friend compared the experience to being on the set for Apocalypse Now, before concluding her article with an admission that her party took a helicopter ride at the end of their trip to see what all the fuss was about. 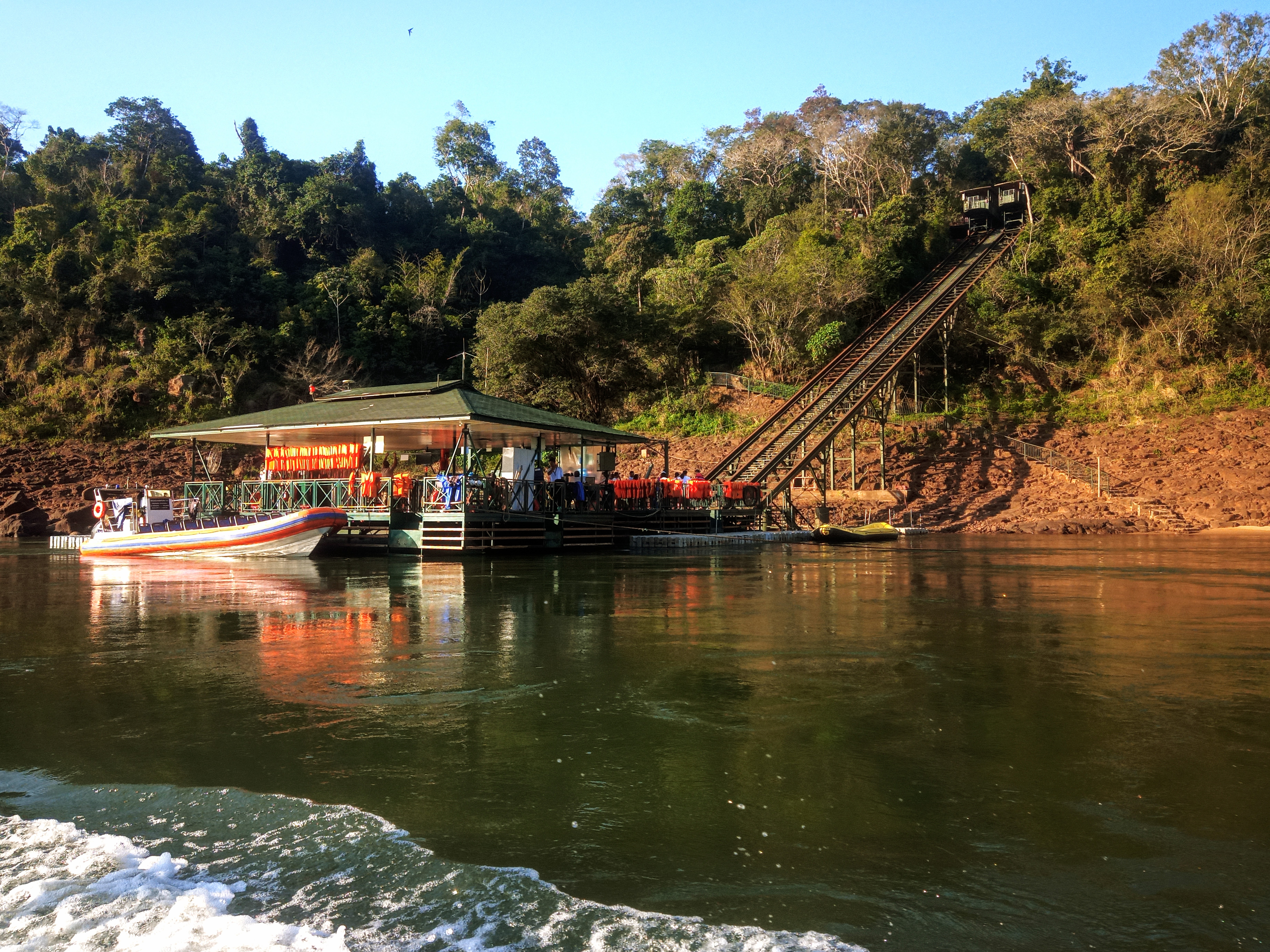 Aside from the waterfalls and the aforementioned hydroelectric dam, there’s little else of note for visitors to the area - the nearby town of Puerto Iguazu has grown over time specifically to support the influx of tourism. Two airports, the heliport, a fairground, a bird zoo that boasts of its conservation creds, acres of buffet halls, restaurants, a duty free compound, a museum named Dreamland, a cinema, a ballroom, more trinket shops, and dozens of hotels ranging from mid-priced to exclusive. All is developed to a higher quality than you might imagine; if it were relocated from its context, it could easily be a midwestern US resort town surrounding some commercialized geological wonder.

On the plus side, the forest surrounding the falls is well protected, with very little opportunity for visitors to get into the depths of the park, and only a small handful of hiking trails other than those that allow viewing the falls - less than 3% of the park is accessible to outsiders. The flocks of small birds darting above the canopy seem inured to the roar of the helicopters. Jaguar roam, and their territories are respected by park officials, who shut down the few trails during breeding season - according to one source, the area is the only place on the planet where the jaguar population is actually increasing. Iridescent birds flit through the trees of the resorts. Coati amble across hotel grounds and paths. Dozens of species of butterflies flock around boat jetties; orchids sprawl from trees.

In 2019 the Bolsonaro government introduced a bill attempting to reopen a road that runs straight through the middle of the park, the action justified as being an economic lifeline to the local community. The route of the road cuts the Brazilian park in two, and according to the vigorous opposition by local biologists and conservation groups would severely impact breeding patterns of keystone species, and would risk giving poachers a much easier access to the heart of the park. The road first existed as a walking trail, and then grew over time to support vehicle traffic, before being shut down in 1986 and again in 2001 after being illegally reopened by locals in 1997. The bill remains in committee as of 2022. The road is currently overgrown and inaccessible. 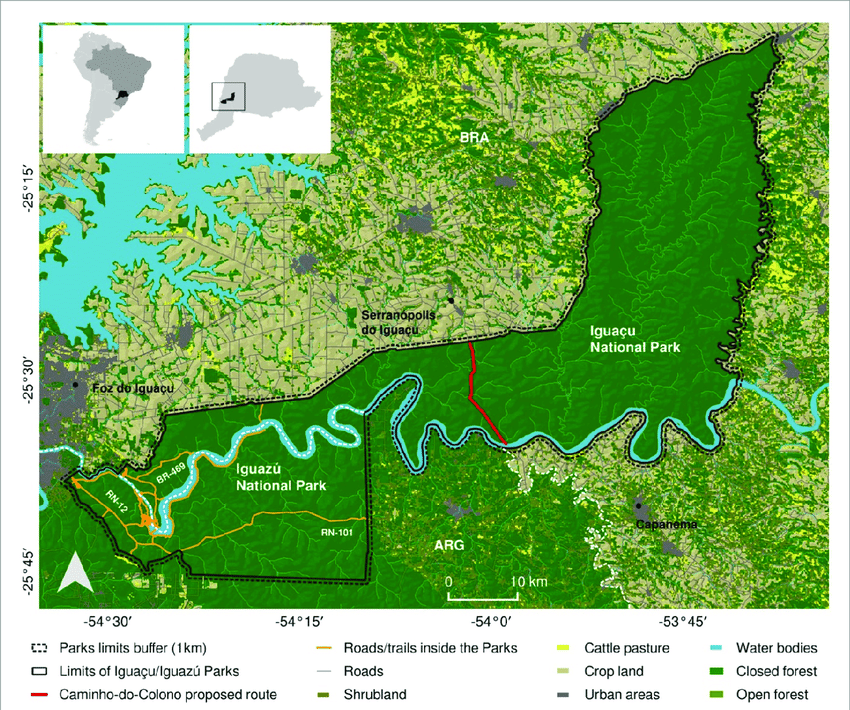 Polemics against over-tourism and over-access risk verging into hypocritical elitism; shouldn’t the plebs be content to get their entertainment from Marvel extravaganzas in their local suburban multiplexes, or at sea on a Disney cruise, rather than intruding upon the pristine location reserved for the enjoyment of a more discerning strata? Over-tourism is never a me problem; rather it’s the thousands of other people on similar trips who don’t belong here, wherever here may be. Of course the argument doesn’t work, and yet you can’t help but to experience discomfort at how sullied by mediocrity the place is. And yet without the attraction of the falls, the forests surrounding Iguazu would have long ago been leveled, and would now host sleepy cattle plump from the foliage of the verdant meadows. Years ago, on a trip to Iceland, we veered off the Golden Triangle (the officially and heavily promoted tourist route) in frustration at having to share the lookout points with hundreds of other visitors. We were delighted to find that seemingly around every corner of the road was some spectacular exhibit of nature - a waterfall, a gorge, a plunging ravine, a wild river, a locals-only hot springs, or a lonely moor. The best part was that we had them all to ourselves. And yet there we were, a trickle escaping the main flow.