Institutions are comforting and predictable. They bring some measure of order to the world, even when that order is rife with inefficiency. When we moved to Costa Rica, one of the surprising differences that we encountered was that there is no postal delivery service. Because there’s no postal service, there was never any need for mailing addresses, and so houses and businesses are often referenced by landmark. I shit you not, we visited a freight importer’s office whose address was “200 meters west of the Firestone”.

Anyway, perhaps we were more primed than most to not miss having a post office at all. Our last two residences in the US had been in rural exurbs of DC, each of which had a terribly run postal service. At the second one, the postmaster’s policy was for the delivery trucks to remain on asphalt only. You received a package and live 1/3rd of a mile up a gravel road? Sorry bud, you win a disingenous “sorry we missed you” pink slip in the mailbox at the end of the road, and an hour out of your day to drive into town to retrieve your package. Fedex, UPS, DHL and various random Amazon subcontractors would of course all drive to your very doorstep.

The question of whether the post office is a thing that really needs to exist has become politicized, at least in the US, so I hasten to add here (before I go further) that I am not right of center, or focused on market solutions uber alles. That done with, why does the post office still exist?

In the US, the post office is a weird hybrid between private and public institution. Employees get federal employment benefits; however, the institution has to be self funded, i.e. cannot directly receive funding from the government. That said, it does have a sweetheart deal on taxes, and can get pretty sweet rates when it borrows directly from the treasury, so it is still subsidized. In many countries around the world, on the other hand, the post office is entirely government run, and I’m sure in many other countries it’s entirely privatized.

For the vast majority of people in western society, the primary value of the post office these days is likely the ability to receive packages - whether random stuff bought online, or something more vital, like a new credit card (to buy stuff online with, of course.) That’s a role just as well filled by private courier companies, and it doesn’t seem justifiable to subsidize this service with taxpayer dollars (or colones, or euros.) Of course, there are some people for whom package delivery is a lifeline - perhaps they’re housebound, and rely on the delivery of medical drugs on a regular basis. It’s also entirely possible that said people live 100 miles down a dirt road in the Mojave desert, that they’re too poor to move, and only the USPS will actually deliver to them. So, clearly, a society wide adjustment whereby a postal service was fully privatized would have some rough edges, and if done in a humanistic way should clearly have some transition period built into it. (And just maybe, maybe, society shouldn’t subsidize living just anywhere. If you want to live on the frontiers, maybe that’s something that requires deliberate tradeoffs in convenience. Of course, a social safety net is a different issue, and not something I’m arguing against; maybe these isolated and housebound individuals who have a medical dependency on the post office should actually be served by a mobile doctor, or a rural pharmacist.)

I mentioned packages. What about letters? Of course email and various digital messaging has replaced 90% of what was previously sent by mail. Many of the fortune 500 are firmly stuck in the 19th century, and persist in sending bits of bleached dead tree for official correspondance, but there’s diminishingly little justification for doing so. Yes, there remains a digital divide. 15% of people in the US don’t have a smart phone (although only 3% don’t have a cell phone.) Likewise, 85% of the US population have broadband subscriptions. So, yes, there’s still a sizable number of people for whom receiving letters is important, but it’s a decreasing number. The concept of exchanging temporary information by paper is an ancient one that we all grew up with, but it will become increasingly irrelevant. The writing is on the wall (and/or in the aether).

There’s a lot of resistance to the idea, though. Browse reddit or quora threads in which the idea of the post office is questioned, and you’ll encounter a lot of emotional defense of the institution. Could this really be because …it’s an institution that we’ve always known in our lives? 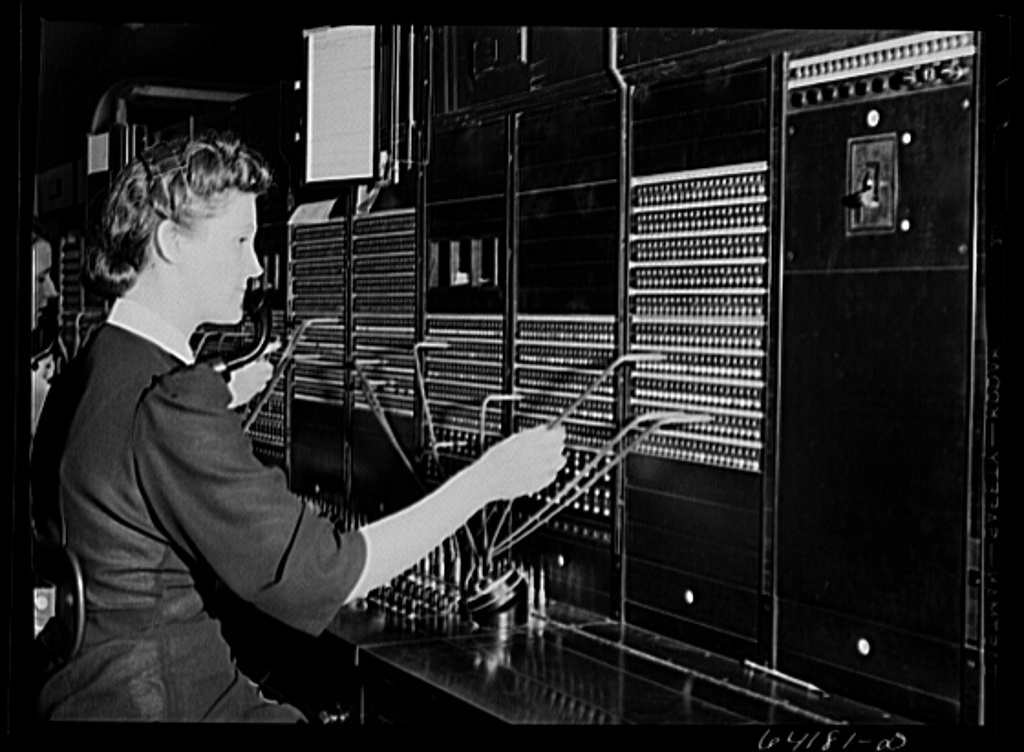 Let’s take another institution that’s going the way of the dinosaur in the next few decades: your phone number. Why do you have a phone number?

Phones, of course, used to be analog devices. Originally, there’d be people who had the job of operating a phone switchboard, and connecting a call between two people involved them actually plugging wires into patchbays to make the connection. Over time, this got automated, and the job disappeared. In the past few decades, the phone system became entirely digitized. If you still have a house phone (and if you’re under 50 or so, you probably don’t) then the handset may be analog, but the actual call gets digitized somewhere between your mouth and your local switchboard. Very likely your call isn’t going over copper anymore. However, it’s probable that you now make all of your calls through your pocket computer (i.e. your “smart phone”), which is naturally enough entirely digital. When you speak into the microphone, a combination of software and fancy electronics converts your speech into bits and bytes, which are then sent either over the internet or through your phone company’s radio network. At the other end, your conversation partner’s pocket computer turns that data back into audio.

So why do we have a phone number again? Backwards compatibility with the old POTS (plain old telephone system) is a justification with diminishingly little value to it. Phone numbers are how phone companies route calls; they’re a unique id that had meaning for the original phone operators, and could be used to map a person to a particular geography and then to a house. With cell phones (and phone number portability) however, the meaning of a phone number’s locality has been lost. And with the advent of companies like Twilio, the concept of a phone number representing a person at a location has been devalued; you can now write a computer program that automatically leases a phone number in the same “area” code as somebody you want to sell something to, places that call (and thousands of others), and plays a recording to the recipient on the other end. Do you pick up calls from unknown numbers anymore? Neither do I.

I didn’t bother to get a local phone number when I moved to Costa Rica. Everybody uses Whatsapp, for better or worse, which is a lot more convenient for me since I can quickly consult google translate in between receiving and sending messages. I have a smart phone, of course, but I have a data only plan. I’ve kept my US numbers, and ported them to a VOIP service, so I place and receive phone calls as if I’m still in the US via an app. It hasn’t been the perfect experiment, as in some areas there’s phone coverage without there being data, but for my needs it’s reasonably successful.

It’s not uncommon for people to half jokingly say “I barely remember my spouse’s phone number”. When you make calls, you probably select somebody from your contacts list and click “dial”. You still often have the implementation detail of having to choose which of their phone numbers to click on, but that’s a relic that won’t survive technology’s march (why shouldn’t the system know which device the person is using, and notify them on that device?) Sometimes you meet somebody new and want to add them to your contacts, but there’s no real reason that needs to be exchanged as a phone number rather than a username, or QR code, or phone bump.

In the last two years, your calls with family have very likely transitioned (at least partially) to video chat. There isn’t an audio chat app that’s as ubiquitous as Zoom (or Teams, or FaceTime, or Meet), and there may never be, but clearly for scheduled conversations we now have an alternative to phone calls that’s at least as good if not better. The concept of being able to reach anybody at any time of day by phone is kind of odd if you think about it; personally I don’t like being interrupted if I’m in the middle of doing something. If you’re old enough, maybe you remember your parents jumping up in the middle of dinner to answer the house phone, and having a conversation with an old friend while their dinner got cold in the meantime. That’s as unlikely to happen these days as it would be for somebody to randomly knock on your door and to be invited in for drinks - which did used to happen, and not that long ago. That said, of course there is some utility in being able to reach people on an ad hoc basis (“help, I broke my leg and got bit by a snake, and am lying face down in a stream that’s rising due to a flash flood!") but this isn’t something that - long term at least - requires the intermediary of a phone company.

My data plan, by the way, does come with the ability to dial 911. Surely there are futurists in various emergency response departments around the world advocating for the need to provide alternatives to phone calls for 911 departments. Why can’t I contact emergency services over SMS or whatsapp, or even email? Why don’t all pocket computers ship with “911” apps built in that let me connect to the nearest emergency response department? Wouldn’t it be useful if you could upload photos, or stream live video, to the person handling the emergency response coordination? Surely that will happen over the next few decades. I like to think that in 100 years the act of contacting emergency services will still be referred to as “911”, but that the actual understanding of what those numbers referred to (“dialing” a number) will have been lost.

Clearly we have utility in owning non-local communication devices, but the devices being “phones” and us having “phone numbers” are as much artifacts of history as the act of sending ink on processed dead trees by messenger. Cellphone companies will transition to being ISPs, and over time the idea of phone numbers will become less and less necessary. Of course, it’s an institution we all grew up with, and people like institutions. But it will happen, simply because there are (and will be) better alternatives.

People used horses to get around for thousands of years. Today horses (for the most part) are a hobby.